Fire on the Island: Last Stop

July 12, 2012
It's been a great week with Fire on the Island and today is the last stop with this wonderful blog tour. Don't you think? I've enjoyed it anyway!

I HAVE POSTED THE INTERVIEW BELOW. PLEASE DON'T FORGET TO SCROLL DOWN FOR AN AWESOME DISCUSSION!

Today, I'm posting a series of pictures of circles of fire. Nope, I can't tell you why. On August 2nd, you will be able to order Fire on the Island and read it for yourself. YaY!

But I will tell you this:

Fire on the Island has circles of fire. Yes, it does. You will want to read this book to find out, won't you?

I hope this week has piqued your interest and you will let me know when you order the book AND what you think of it after you finish reading.

For the pictures, if you feel creative, you can write a caption. Go ahead. You know you want to! I'm going to give you an example. You can comment and label your caption for picture 1, 2, 3, 4, 5, or 6 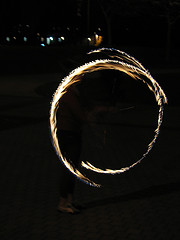 The hot flames caught in a circle, spewing scalding lava-like blazes in a round path. 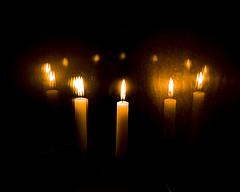 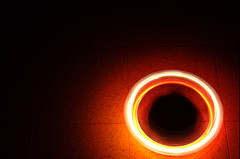 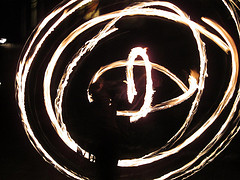 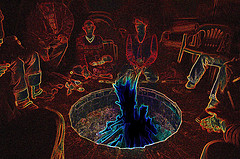 1.    Please tell us how you became interested in Scottish folklore and superstitions.
I have always been interested in anything paranormal, from ghosts to witches, myths to superstitions. I think it probably started when I lived in a haunted house when I was a kid. Ever since then I've been fascinated with things like that. I try to go on ghost walks in any city I visit that has them because they usually tell about all of the local superstitions, and I've even been on paranormal investigations! Scotland is rich in history and folklore, and when you're there, you just feel the magic in the air, as if there is much more than meets the eye.

2.    Do have a favorite folklore you would like to share with us?
I'm not sure if this qualifies as folklore but it is an interesting tidbit. Travelers often use cairns—stacks of stones—to mark a trail or to signify that they have reached a summit or particularly difficult destination. It's somewhat of a custom in Scotland (and probably other places too) for a hiker to place a stone on top of an existing cairn. On one of the beaches of the Isle of Arran—one that is described in Fire on the Island—as thousands of cairns so, instead of adding to them, my husband and I built our own. There is an ancient Scottish blessing, Cuiridh mi clach air do charn, which means “I will put a stone on your cairn.” *Can provide picture if interested, see below. (I AM SORRY! THE PICTURE WOULD NOT COPY:(

3.    What inspired you to write Fire On the Island?
Initially it was music. My good friend and I had begun going to a lot of live blues shows, and there's just something about the music that just makes you want to do something, to create. I'd always wanted to write, so I decided to turn one of my stories into a book. My trip with my husband's family to Scotland a couple of years before provided the perfect setting. His maternal grandparents were from the Isle of Arran, and it was amazing for he and I to get to spend time together in such a magical place.

4.    How much research was involved in your book? Where did you find most of the information for your book?
Spending time on the island was the best 'research' I could possibly do. Most of the places I mention in the book, we've hiked to, except some of the higher peaks. Arran is like no other place I've ever been and it was just begging for a story! Also, the travel book I mention in Fire on the Island is actually a real book that I have a copy of. It was published in 1947, and has detailed descriptions of all of the landmarks and walks on the island, plus hand drawn maps with the original names of many of the places, many written in Gaelic. That helped a lot with my writing as well.

5.    Just for fun: When is your favorite time to write? Do you have a favorite outfit or pen or something else you must have when you write?
Believe it or not, in my car when I'm driving! Obviously, I don't physically write while driving, but I find that's the best place for me to be able to zone out and work out the story. Occasionally I'll voice record, but usually I'm just thinking about what comes next. The only tool I have to have when I write is my iPod. I'm not sure if I could connect the dots without music to listen to.

6.    I would love to know about your soundtrack you created for Fire on the Island!
The songs I include in my playlists are often songs that I happened to be listening to when I wrote a particular scene or, more often, songs that created some kind of imagery in my head that morphed into an idea for a scene. So you’ll see a variety of different artists and genres, each having played an important part in the creation of the story. Overall, a majority of Fire on the Island's playlist is blues. It's too long to paste here but you can see it at http://jkhogan.com/foti_playlist/.